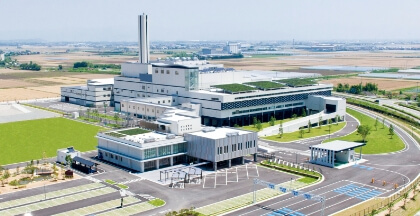 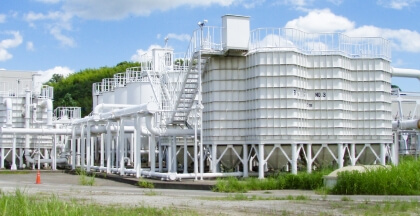 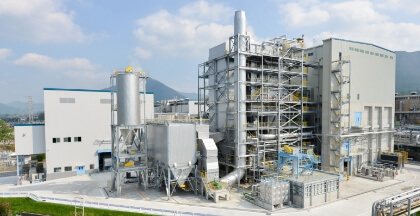 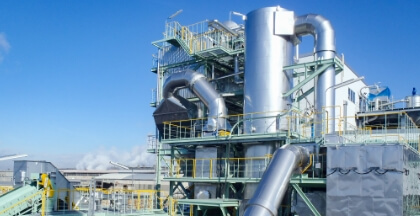 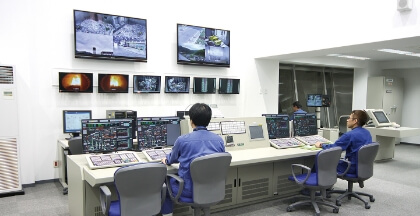 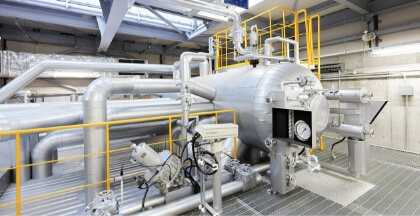 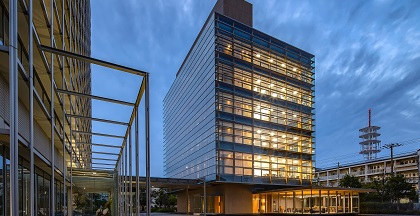 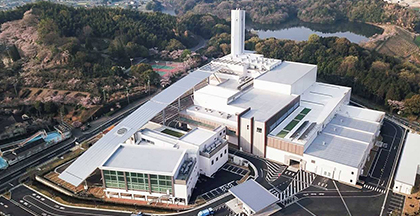 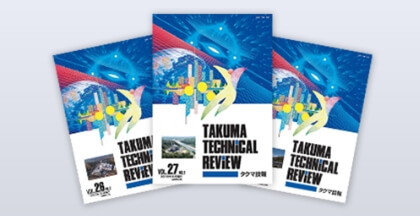 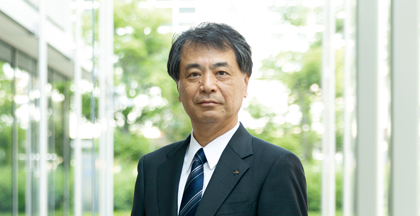 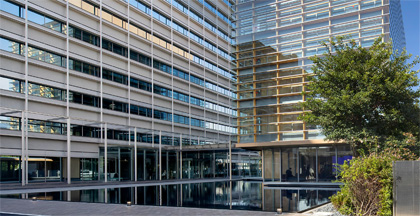 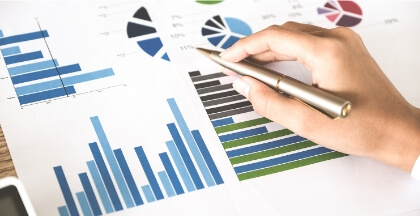 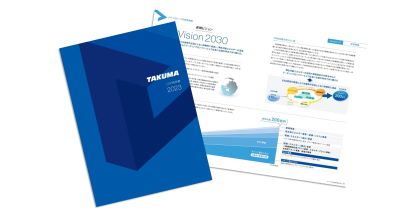 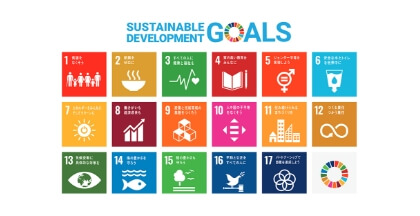 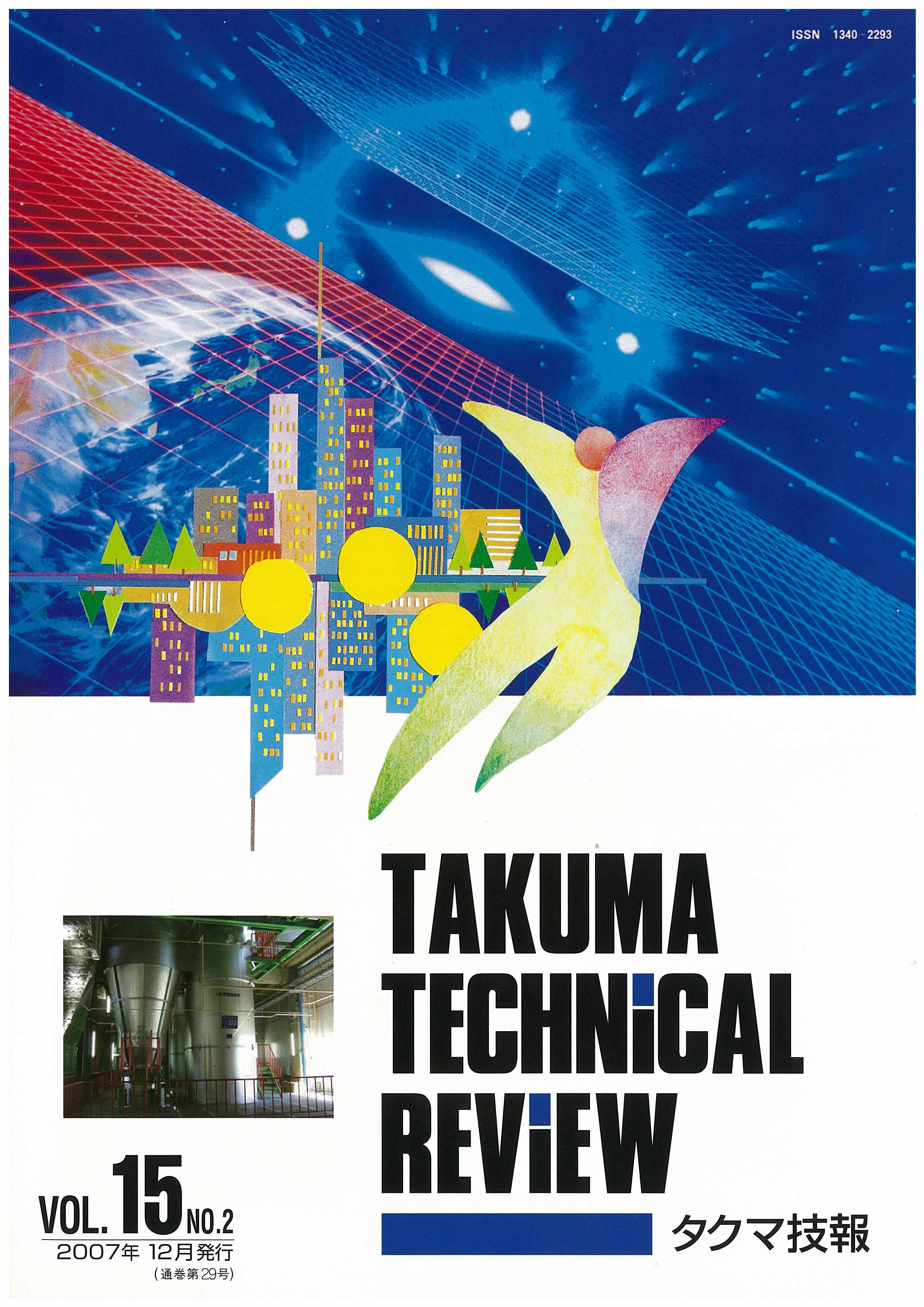 After building a continuously-operated incineration facility according to "The New Guideline for Dioxin Control 1997" next to a batch operation plant that was built roughly twenty years ago, dioxins emission from the old and the new plants and the contamination in the neighboring areas were measured. This enabled us to ascertain the reduction of environmental load by the replacement of the old plant with the new one. The dioxins emissions from the stack and its maximum concentration in the neighborhood atmosphere have been greatly reduced, resulting in the cumulative reduction of its concentration in pine needles. The simulation of atmospheric dioxins diffusion based on the dioxins emission data at the plants revealed that the simulated and measured values were nearly the same when the old facility was in operation. However, the simulated data were lower by several orders than the measured concentration when the new plant was in operation, suggesting that the effect of the new plant to it's environment cannot be accurately estimated with the parameters used for this test.

Gasification of tar by catalytic steam reforming was examined in a biomass gasification processes. Various carrier and promoter for the Ni catalyst have been tested for improving resistance to coking and sulfur poisoning. An MgO-CaO carrier has produced a high coking resistance and good thermal stability, while the addition of WO3 promoter has exhibited superior resistance to sulfur poisoning. This has enabled a much more stable tar reforming activity than commercial catalysts. It has also shown a high tar-reforming performance even in gas containing sulfur that precluded the use of general catalysts.

In designing an MSW incineration furnace, thermal fluid simulation has been used for optimizing the furnace shape and the location of the secondary combustion air nozzle.

In an actual operation of the furnace, the waste feed rate and the primary combustion-air flow are controlled so that a certain level of steam generation, hence a constant combustion heating value, are maintained. This means that the furnace may not be performing under an ideal combustion condition matching the kind of waste, and the location of the burn-off point and the combustion air volume may vary even though the steam generation remains steady. This can cause CO spikes and NOx surge.

The result of the simulation by this new system has proven satisfactory for the monitoring and controlling of the waste incineration facility.

Fujisawa City-North Environmental Agency Plant #1 is the second municipal MSW plant in which we embodied our Mass・Burn Renaissance combustion technology, and our first operating plant under PFI. Test operation began October 2006, and the plant delivery was completed on March 31, 2007. The plant has been operating satisfactorily since it launched a commercial operation on April 1, 2007. This plant was built to run for 20 years with steadfast and economical operation.

The waste generated by the paper mills recycling cardboard has been incinerated for heat recovery, but effective treatment is difficult due to its high moisture content.

Effective use of the industrial paper waste as a biomass fuel would reduce the fossil fuel consumption in the paper plant, lowering the emission of the green house grasses.

We have built a stoker-type incineration power generating plant with the latest high-efficiency combustion technology for Rengo Ltd. in its Yashiro plant. It burns industrial paper waste while recovering the energy as steam and electricity.

The preceding article reports on the outline of the plant design, and the result of its test operation.

In managing wastes, it is recommended to improve the total energy efficiency by directing wet, organic waste to methane fermentation while taking dry waste such as plastics to incineration. With this background, we have developed a simple system of waste separation by which materials suitable for fermentation are selectively recovered and the unsuitable materials are removed.

Separation test of MSW using simple mechanical system has proved that more than 98% of the raw waste fit for methane fermentation can be recovered by using an optimum screen diameter. It has reduces the portion of unfit materials such as plastics to less than 20% of the total waste stream.

We have confirmed that the waste thus sorted and fermented has generated 167m3 of gas (methane concentration:56%) per one ton of sorted waste.

The above result proves that we have here a waste sorting system that efficiently recovers materials suitable for methane fermentation.

We have been developing a methanol synthesis process using the process gas produced by biomass gasification. A new methanol reactor has been developed that is more efficient than the conventional reactors in order to build a system that matches the small-scale, decentralized biomass processing facilities. Methanol synthesis test in bench-scale plant has confirmed that the yield of methanol has been improved thanks to the effects of methanol condensation and extraction by the local cooling inside the reactor.

As the result of methanol synthesis test from the gasification of scrap wood and pruning branch as wood biomass, we have observed both performed stable operation. We examined the test on the conditions of the air-fuel ratio (λ) 0.40~0.45 and the steam/carbon ratio(S/C) 0.55~1.15 for the optimization test of the gasification conditions. As the result, the yield of methanol in the one-pass unchanged because the CO concentrations decreased though H2/CO of the process gas increased when S/C was increased. Additionally, considering that when S/C is increased, it is necessary to increase λ for the maintenance of the temperature of the gasifier, S/C of 0.5~0.7 is realistic condition in this system.